What Does It Mean to Have Power?

What Does It Mean to Have Power? 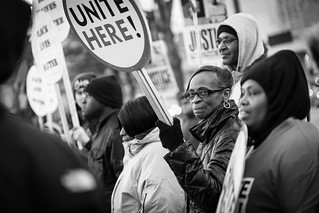 As part of WDET’s series examining the 1967 Kerner Report with the Detroit Journalism Cooperative this year, Detroit Today Host Stephen Henderson speaks about power and what it means to be powerful or powerless.

Guest Marc Kruman, professor of history and founding director of the Center for the Study of Citizenship at Wayne State University says powerlessness is related to the Voting Rights Act.

“Voting rights have always been viewed… as the crucial right – the right that underlays the rest and that will be used to protect the rest of one’s rights, and the mark of full citizenship,” said Kruman.

This is why, he says, there have been “major efforts on the part of Muslim communities and Hispanic communities to apply for citizenship and get the right to vote because it’s seen as a way of protecting themselves.”

Regarding the United States Supreme Court’s Citizens United ruling, Kruman says that decision, “has certainly contributed to a sense that one has no power.”

Stephen Ward, a historian and associate professor at the University of Michigan’s Social Theory and Practice program points to the relationship between the Black Lives Matter Movement and the idea of power.

“I’m not sure how much I see Black Lives Matter… so much as a reflection, a statement, of powerlessness, but rather as a statement of putting pressure on those in power,” says Ward, who is jointly appointed in the Department of Afroamerican and African Studies at U of M.

“The people who are calling for Black Lives Matter grew up with Black mayors and Black police chiefs,” so although there has been a slight shift of power, many people still feel powerless.

A quick guide to the 1967 Detroit Riot

Michigan’s Refugees by the Numbers [CHARTS]